Star Apprentice: Magical Murder Mystery is an award winning danmaku-detective game that combines the point-and-click style deduction gameplay of Danganronpa and Ace Attorney with the high octane bullet hell gameplay of the Touhou Project franchise. You play as the Star Apprentice, a fledgling sleuth studying under her mentor, the world renowned Detective Lasnam.

Throughout the game, you'll grapple with a colourful cast of mysterious magical suspects, including an obsessed fangirl, an alcoholic, and a business tycoon. Will the Star Apprentice be able to rise up to the challenge and find the culprit behind the mystery, or will she be stuck in her mentor’s shadow forever?

Term Project for CMPUT 250 at the University of Alberta

As the titular Star Apprentice Minnie, you will traverse a magical train, collecting evidence and confronting suspects. Uncover clues that will allow you to confront the quirky cast of characters in chaotic bullet hell Confrontation scenes. Blast away the enemy's contradictions, and discover the truth behind the mystery aboard the Scarlet Express!

- note that you can move in any direction

Hey Willow - workings!!! ! I love Star Apprentice: Magical Murder Mystery!!! How do I pay you money for this game?!?!?

First, thank you so much for your support and for enjoying the game! This game was a student project, so we are going to keep it indefinitely as a free download. However, if you're still aching to give back to us, we would really appreciate if you donated to these charities:

Hiya Silly Willies!!! I'm getting this weird bug where the first letters of sentences are disappearing? Are you aware of this?!

Unfortunately, this is a loading bug related to RPG Maker that occurs more often with slower computers & internet connections (for web deploy). We are aware of the issue, and it is currently unfixable without changing engines!

Hi Wallyworks, I would love to get in contact with you!! How would I do that?!

Our email is will.o.works.games@gmail.com if you'd like to get in touch with us!

Helo Willy Wonkers, the text in the game is all garbled up!! Did you invent a language for this game?!?

If you are using Brave browser or a similar browser with protective features, you may experience issues with the text in the web deploy. Switching to Chrome / Firefox, or going "Shields Down" should help!

Hihi Well Washers! I like the music of the game and I want to listen to it outside of the game!!! Where do I do that?!?!?

Hello William Worker. This game is great and all, but I think it's too short. When is the FuLl VeRsIoN coming out?????

Stay tuned, perhaps there is a mystery yet to be solved. . .

1. The game is found directly above!

1. Download the Windows. zip folder containing the project. 2. Unzip the .zip folder. 3. Run the executable inside of the folder.

1. Download the Mac .zip folder containing the project 2. Unzip the .zip folder 3. Open the folder and drag the executable into your applications, or run it from directly in the folder.

Note that there is a bug with RPG Maker that can sometimes make it difficult to open games on Mac based on your security settings. In order to rectify this, go to your System Preferences application and change your Security setting to allow it to open the executable.

I finish the game and damn I LOVE IT.

things i have to say

Great game, liked their designs, voice acting fits them and was amazing, gameplay was difficult and enraging, but not "i want to break everything" enraging, more like "*sharp inhale*" kind of enraging . And great mystery too! Amazing job! ^^

Super cute and fun!! Appreciate that you added an "infinite lives/health" accessibility option as well ^_^

I was surprised when i saw i could play on my phone, at least in the browser version, the game really made my day. :)

Heya! Just wanted to let you guys know that I really liked this game, it has a very interesting twist of genres I've never seen before. I'm completely horrible at the actual danmaku sections, but I can appreciate the creativity put into the mechanics. The gameplay, art, and story are well done.

If you don't mind, I also recorded my playthrough here:

The only pieces of feedback I have is:

Anyways, I might be biased because I love Phoenix Wright/Danganronpa, but I still highly rate this project because of how unique the premise is. I wish you all the best of luck for any future plans!

Thanks so much for playing our game :)

Love the game so much so far -- really nice art and story! There is no way I am going to beat that battle though, and I forgot to save before, so maybe I'll try again another day lol

thanks so much for playing our game, you got this!! :)

My game encountered a bug :( its getting so good so far. I know this is not your fault but ya...

sorry to hear that :( yeah, the web-deploy of the game specifically is a bit buggy, hopefully you were able to save and resume your progress! thank you for playing our game regardless!! 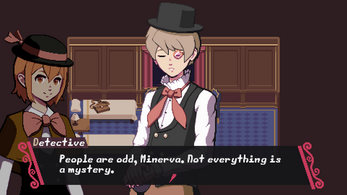 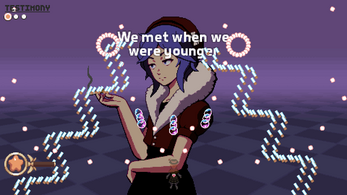 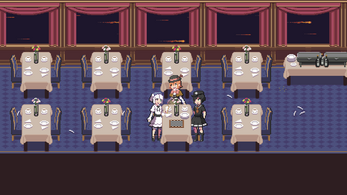 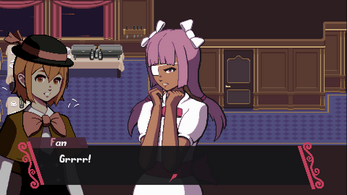